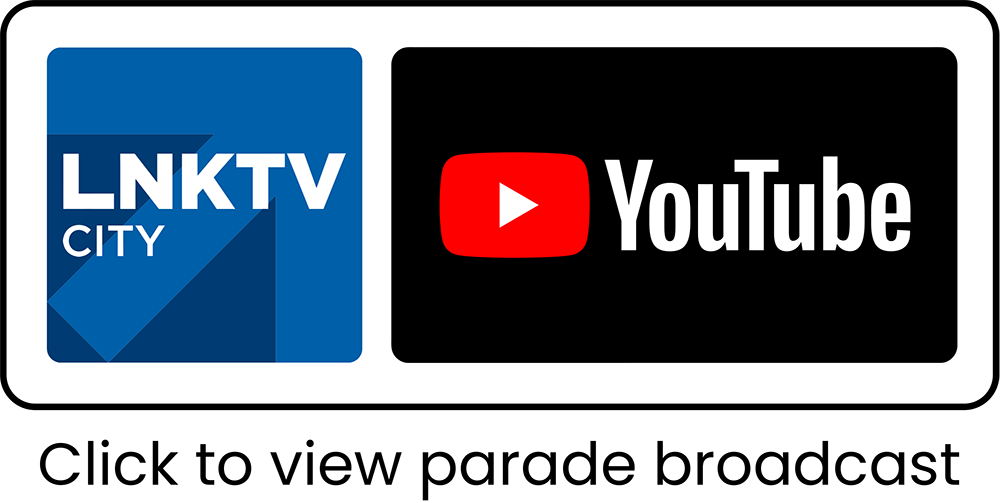 Due to the current conditions, there will not be any distribution of candy or any materials to the spectators. We recommend everyone try to maintain social distancing for a safe and fun event.

Their involvement has
made this parade possible. 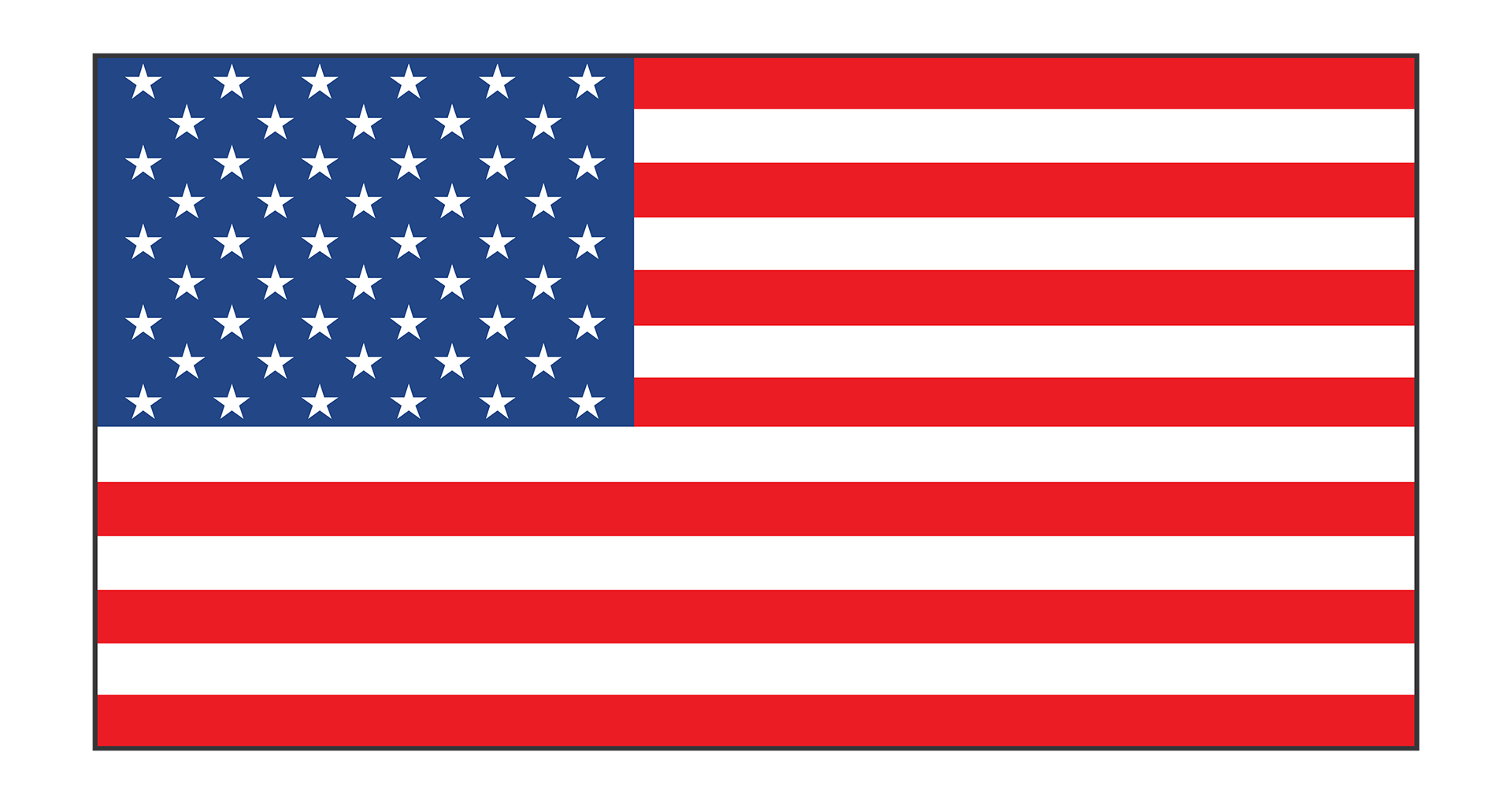 The Marine Corps League will lead the parade line to the Capitol Building, where they will stop for the opening ceremony and playing of the National Anthem.

Senior and Disabled Hometown Heroes men and women of our city who have served our country proudly. 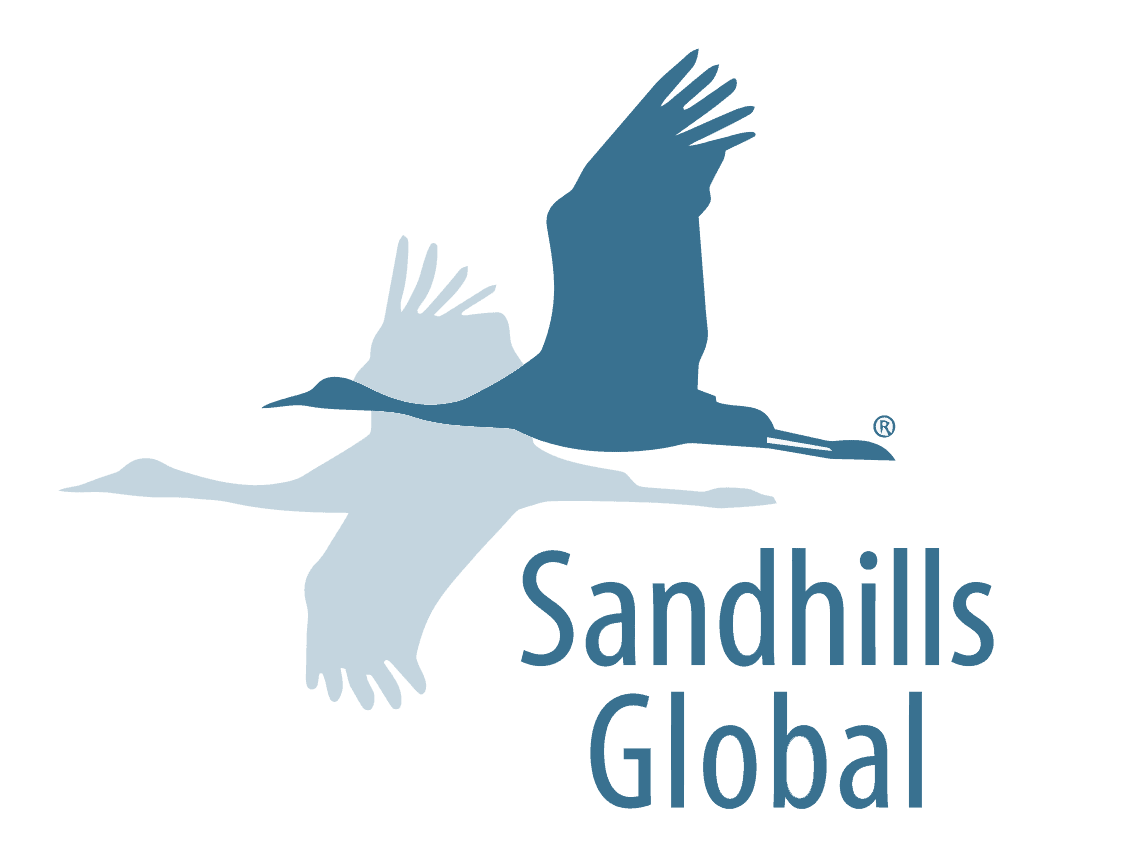 In 1978, Tom and Rhonda Peed founded Sandhills Global (then Peed Corporation) in an old blacksmith shop in Webster City, Iowa. The company launched its first publication, Machinery Trader, in March of that year with a team of just seven employees. The staff placed images and content by hand on every page, then bound the books and hand-labeled every copy. The magazine that is today distributed to millions of readers worldwide in the used construction equipment machinery market was originally published in a print run of just 20,000.

With the success of Machinery Trader, Sandhills steadily grew over the decades that followed, expanding into new markets and launching publications aimed at serving specific sects within its core industries. The company embraced online technologies as early as the 1980s as it expanded to offer a range of hosted solutions to equipment, aircraft, and vehicle dealers and manufacturers worldwide. 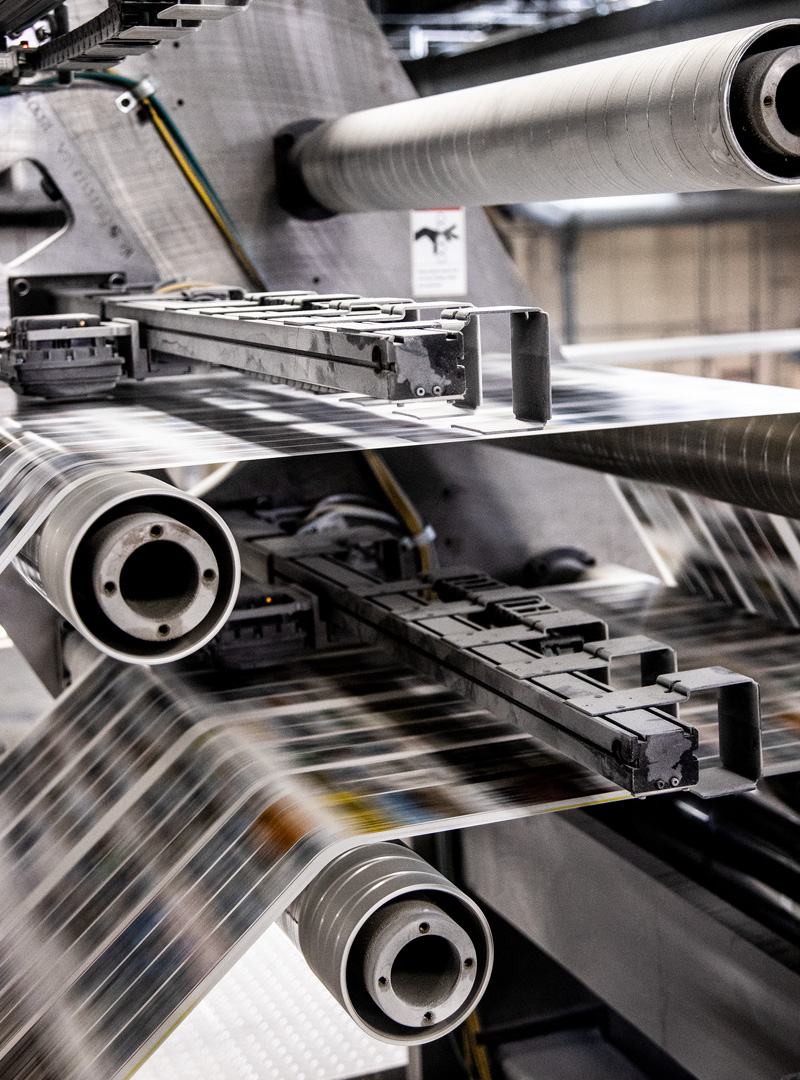 After its growth created the need to relocate operations to Lincoln, Nebraska, the company settled into the 68-acre campus that is today its global headquarters.

Early and ongoing investments in print technology and the calculated expansion of its distribution channels led to the launch of industry-specific publications for buyers and sellers in the agriculture, transportation, and aviation industries. 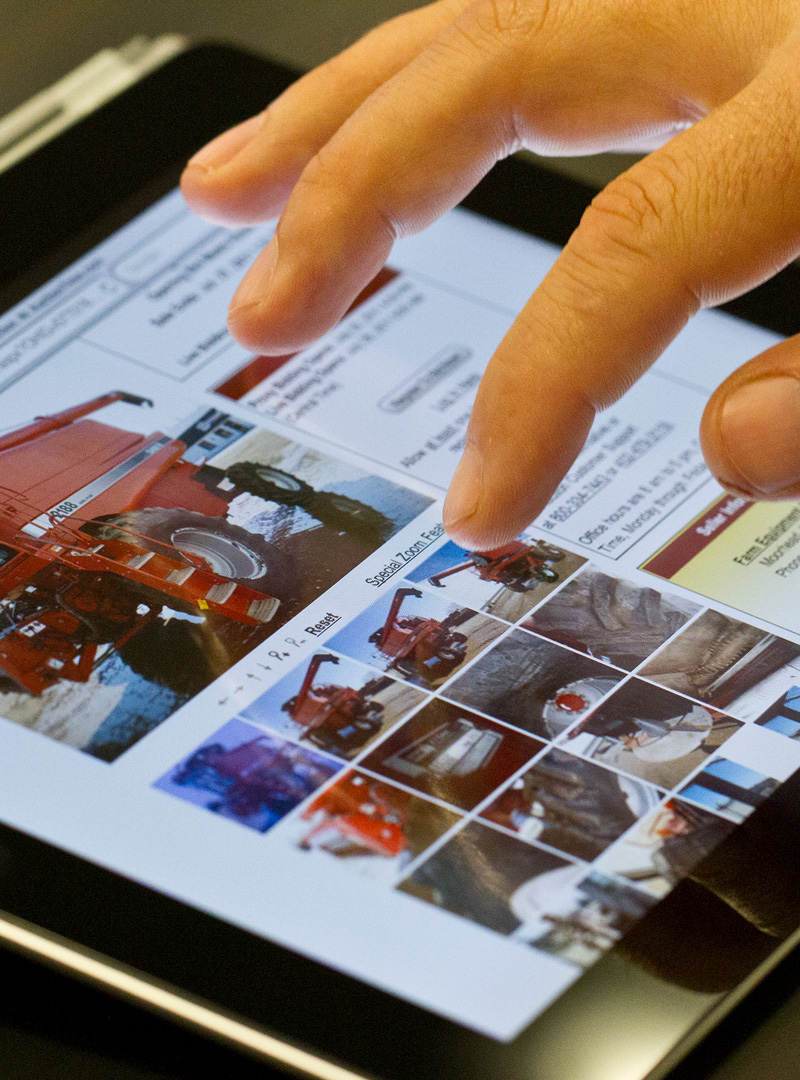 With monthly print distribution today in the millions, Sandhills’ state-of-the-art print and bindery equipment is some of the printing industry’s most advanced. The press facility operates around the clock, leveraging digital, direct-to-plate technology capable of producing 1.76 million pages per hour alongside a bindery capable of outputting up to 22,000 stitched books per hour.

Millions of print publications follow calculated distribution channels in markets all over the world to connect buyers and sellers in industries that power the global economy.

Meanwhile, Sandhills has also invested in the secure, high-capacity state-of-the-art servers and tech infrastructure needed to power its own operations, and to support the growing needs of a global customer base. As its print presence and hosted services grew, the company simultaneously turned focus to building technology capable of connecting buyers and sellers not only in the niche markets that power its industries across both print and online channels, but across retail, rental, wholesale, and auction markets.

Investments in data processing have propelled its diverse range of products and services even further, providing crucial, real-time market and asset data to businesses in its core industries and the periphery industries that support them.

Even with the evolution and early adoption of new technologies that contribute to efficiency and productivity, it’s the intangibles—the employees, the work ethic, the culture—that remain Sandhills Global’s greatest assets. Fostering a collaborative work environment and a fast-paced, entrepreneurial approach to solving problems and capitalizing on opportunities, the company culture is one that values creativity, growth, and innovation. It is also one of stewardship. Sandhills maintains a community-minded spirit of service rooted in a long history of giving back. It works closely with local nonprofits and community organizations to host events, volunteer time and resources, and match employee donations—initiatives that have helped build a culture of service and stewardship from the ground up. 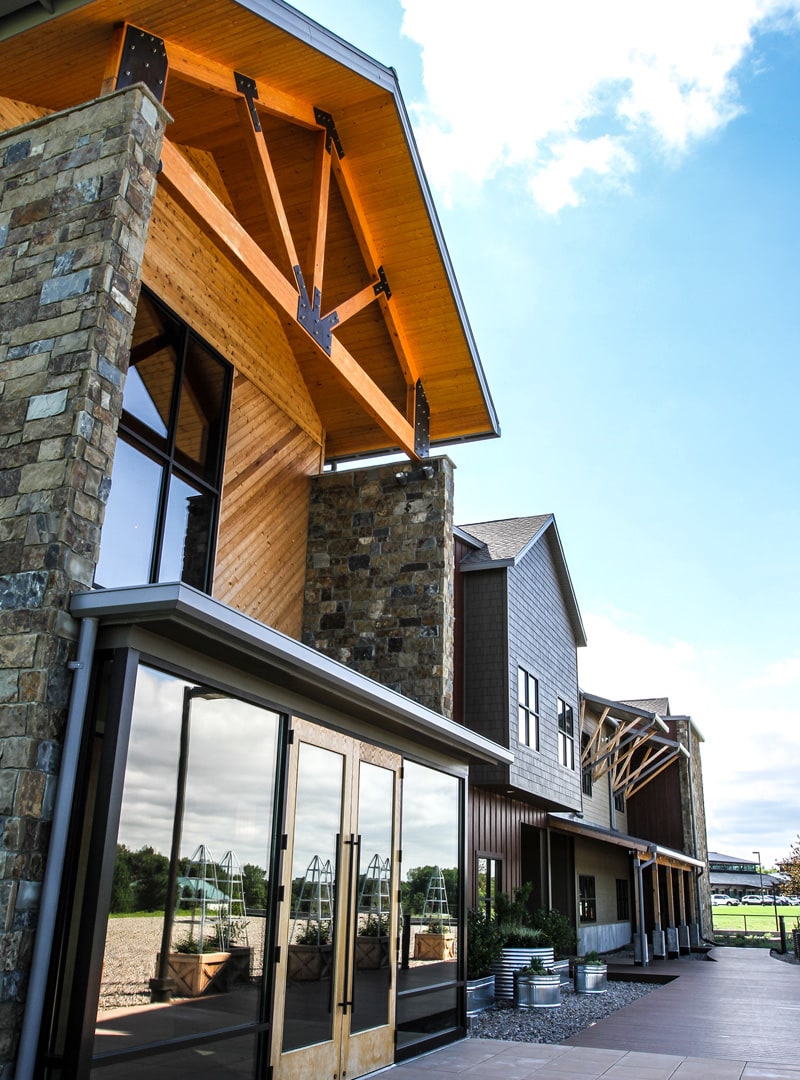 Today, Sandhills Global and its international subsidiaries employ a staff of nearly 1200 people worldwide. An innovative industry force, its operations span continents and serve the diverse needs of multinational corporations all the way down to the small, family-owned businesses that supply farmers with the equipment they need to plant and harvest another successful crop.

Carter, 61, served as superintendent of the U.S. Naval Academy in Annapolis, MD, from 2014 to 2019, the longest continuously-serving superintendent in Annapolis by special request of the Secretary of the Navy and the Chief of Naval Operations. As superintendent – the Naval Academy’s equivalent of a university president – Carter oversaw all functions of the institution, including leadership of 4,400 students and 1,500 faculty and staff, management of a $500 million budget, and oversight of academics, facilities, admissions, and policy.

He also formed the nation’s first accredited cyber operations major and accredited a nuclear engineering major at the Naval Academy.

During his tenure, the academy was ranked the nation’s No. 1 public university by Forbes Magazine. Prior to that role, Carter was president of the U.S. Naval War College in Newport, RI, where he led 1,600 resident students, 100,000-plus distance education students, and 600 faculty and staff in graduate-level education.

Carter was a successful fundraiser in both roles, working with his foundations to raise a total of $400 million in philanthropic support for academic programs. He also worked with Congress to direct $120 million toward a new cyber operations building at the Naval Academy; the building will be named after Rear Admiral Grace Hopper, the first at any service academy to be named for a woman. Carter has extensive experience briefing members of Congress and has shared the stage at speaking events with Presidents Trump and Carter and Vice Presidents Pence, Biden, and Cheney.

Carter also brings extensive military service, having graduated from the Navy Fighter Weapons School (Top Gun) in Miramar, CA, in 1985. He was commander for the Carrier Strike Group Twelve, in which he commanded 20 ships, two nuclear-powered aircraft carriers, and two carrier air wings that were deployed to Afghanistan and the Arabian Gulf. He is a naval flight officer with more than 6,300 flying hours, and has completed 2,016 carrier-arrested landings, an American record.

Carter earned his bachelor’s degree in physics and oceanography from the U.S. Naval Academy. He also has educational credentials from the 18-month-long Navy Nuclear Power School, the U.S. Air Force Air War College, the Naval War College, and the Armed Forces Staff College.

The son of an English teacher, Carter was raised in Burrillville, RI, a rural, one-high school town in the northwest corner of the state where he became an accomplished clarinetist and baritone saxophone player. He and his wife, Lynda, are currently transitioning their residence to Lincoln, NE. They have two adult children, Brittany and Christopher. 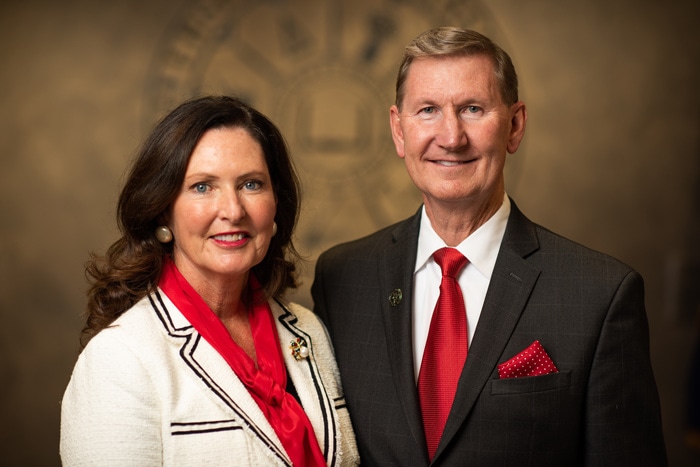 Carter works as a team with his wife, Lynda. They have been married for 37 years.

Thank you Bands
and Sponsors! 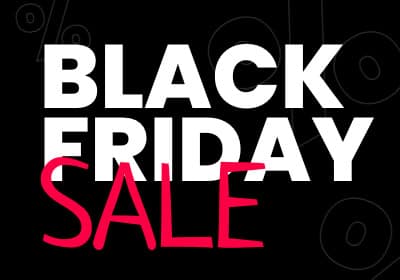 The parade highlights the pride, sacrifice and service of our veterans. Help us recognize and show support by donating today.